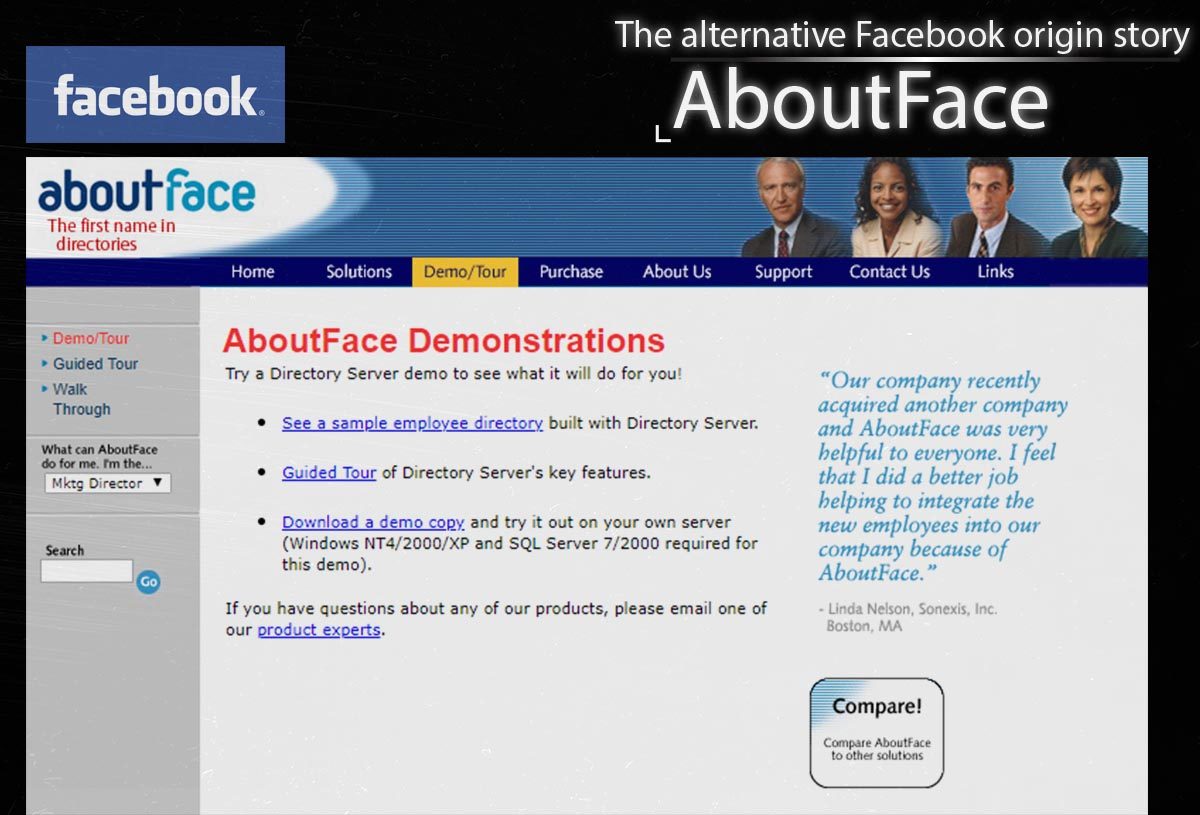 The movie “The Social Network” was a smash hit and gave the general public a good understanding of how Mark Zuckerberg started Facebook. If you haven’t seen the movie, take a look at the Facebook Wiki and educate yourself on it’s history. The story told in the movie is one we have been questioning lately as our research indicates that Facebook may have borrowed some ideas from an employee management system known as About Face, who owned the domain facebook.com at the time.

What we are proposing about Facebook and it’s history is just speculation from internet archive digging we have done, don’t take this too seriously.

Facebook didn’t start as the Facebook we know now, they went through some name changes as the versions of Facebook advanced. It was initially called Facemash in 2003 and this is when Zuckerberg first developed the app. At this stage of Facebooks life, it was comparible to the once famed website “Hot Or Not” which allowed you to rate girls and guys with a “hot” or “not” rating.

Let us fast forward our story to 2005 when thefacebook.com acquired Facebook.com for $200,000 USD. The company was known as About Face, a website for companies to have an online yearbook of sorts to help track pictures and details about co-workers. This was the logical choice for Facebook, shortening the domain made sense. However, is it possible they had been eyeing this website for a lot longer?

Our research shows that About Face may have been the inspiration for the shift in Facebook’s early development.

“AboutFace Corporation wants to help your organization become more efficient and effective.  Our software solutions make it easy for you to manage and publish your most important information.  This increases communication so that people have the information they need to do their jobs more easily and effectively with a minimum of frustration and re-inventing of the wheel.” – About Face 2001 Mission Statement

About Face was created in 2001 and they were the primary owners of the Facebook.com domain. According to the facebook.com WHOIS record, About Face may have bought the domain as early as 1997 (WHOIS record) .

On a first hand look, About Face was a simple website that gave users the ability to create a profile, write a bio about themselves and upload a picture. It was primarily used for law offices, universities or large corporations. The software hosted on private servers and the various “About Face” networks did not interact with each other as they could only be hosted on a closed intranet.

As early as 2001 About Face had a fully functional profile that displayed details about employees or users in database. This would be run on a local intranet, so it didn’t have the same networking value that Facebook would develop. However, Facebook did start as a service for just Harvard students on their internal network which would have been a suitable environment for About Face to run. Is it possible that Facebook found inspiration in what About Face was developing?

About face had a simple, but effective method for editing profiles. Done by an admin team, users would be entered into the directory and details such as University, Phone Number and job would included on their profile.

Easy to Administer
Even though About Face is very powerful and flexible, it is extremely easy to use. Shown here is the data entry screen, used to enter new people into your directory and to modify existing entries.   Just punch in the information and click the Save button.  The system will automatically generate a username and password for the person, and then it will automatically generate an email to that person informing him or her of this information and explaining how to get into the directory.  It doesn’t get any easier! – About Face Product Demo

About Face was ahead of it’s time with their ability to network coworkers together to efficiently. This would add huge benefits to the workflow of the office as you’d be able to search people by name, phone number or even their area of expertise. This is very similar to the direction Facebook wanted to take at Harvard.

About Face was progressive with their security settings and privacy as well. As shown in their product demo, only IP addresses within a certain range would have access to About Face as specified by the admin team. About Face also allowed users to set their own permission settings and could hide certain details of their profile easily.

It’s impossible to know if Facebook was inspired by About Face, or if it’s a simple coincidence that the domain they wanted to buy was hosting a similar service. About Face was a fully functional profile network with a simple user interface long before Facebook had developed what we know call a social network. What we do know is the similarities are extremely obvious and About Face had a functional product that could have been adapted outside of an internal network if they desired or had the means to do so.